Live the passion of Romeo and Juliet in Verona with this Lake Garda and Verona Day Trip. During the tour, you'll visit charmingly romantic spots such as Sirmione. 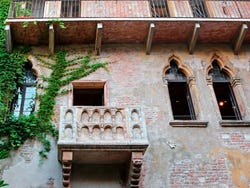 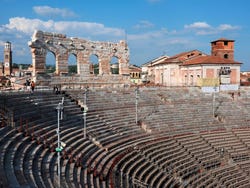 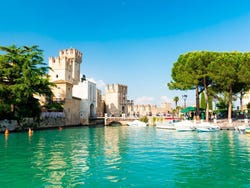 We'll meet at 7:30 am to take a bus to the Veneto region, departing from the Largo Cairoli roundabout.

We'll drive along the winding streets of Verona's historic centre and stop outside Juliette's house. You'll spot the balcony where Juliette said her fateful words "O Romeo, Romeo! wherefore art thou Romeo?". The building now receives hundreds of love letters to Juliet, also because it was the location for the most famous scene in the film 'Letters to Juliet' which helped popularise this palazzo as a tourist attraction.

The city also has a great imperial history, which you can see by visiting the Roman 'Arena di Verona' amphitheatre. During the Imperial period, this 'Colosseum in miniature' was the home of gladiator fights, but today hosts opera performances. Here you'll have 1 hour of free time to eat and continue discovering the city at your own pace before returning to the bus.

In the afternoon the medieval Sirmione castle welcomes us to one of the most beautiful towns on Lake Garda. To reach the old town you'll have to cross the drawbridge which connects the area to the peninsula. Once in the centre, you'll have 1 hour 30 minutes of free time to see its archaeological ruins from the Roman period.

From Sirmione we'll head back to Milan, leaving you at the meeting point at around 7:30 pm.

All of our providers comply with local legislation and applicable health recommendations to avoid the spread of Covid-19.

The activity takes place with a guide that speaks in english.

Entry to the monuments

You can book up until 48 hours before the activity as long as there are still places. Book now to guarantee your spot.

US$ 116.50
No hidden fees or surcharges
Free cancellation up to 7 days before
Book

Free! Free cancellation up to 7 days before the day of the activity. If you cancel under this time or do not show up, you will not be refunded.

Largo Cairoli roundabout, on the corner with Via Cusani 18.

Verona is spectacular and from Sirmione, with everything clear, there are fantastic views of the Alps. Opinion translated. Show original.

I travelled with friends
Show all the reviews
like Free

9.60 / 10 313 reviews
Discover the secrets of an Italian city that combines history, fashion and architecture in equal parts on this free walking tour.
Free!
Book
like

No rating yet
Works by Caravaggio, Raffaello, Tintoretto and other extraordinary artists await you in the Pinacoteca di Brera. Afterwards, you'll go on a guided tour of this
US$ 67
Book
like

8.30 / 10 217 reviews
The open-top Milan sightseeing bus is the perfect way to discover all the main landmarks around the magnificent Italian city.
US$ 25.80
Book