Parco Sempione is a vast green space very close to the Castello Sforzesco. The English landscape park was established between 1890 and 1893.

The park has an overall area of over 47 hectares. It has trees, bushes and flowers dispersed among its many vivid green lawns and a pretty artificial lake, which houses numerous kinds of birds.

The green space is home to hundreds of animals, plants and beautiful buildings. The following buildings are worth visiting:

Parco Sempione is a large delightful urban park in the centre of Milan with large green spaces where tourists and locals come to rest and relax when it is sunny. In summer, the park does not offer as much shade as one would like, since the trees only provide shade in the landscaped areas. 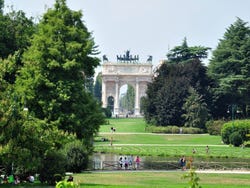 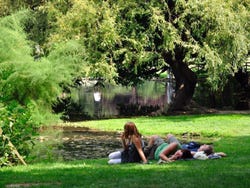