Despite the Milan Metro only having four lines and 111 stations, it is currently the longest metro line in Italy - measuring 58.7 miles - 94.5 km. It surpasses the metro in Rome, which only consists of three lines.

The Milan Metro is one of Europe’s most modern metro systems. Although the first projects to build a metro rail network were designed at the beginning of the twentieth century, it wasn’t until 1957 that the first metro line was set up. The Milan Metro was inaugurated nearly ten years later, in 1964. 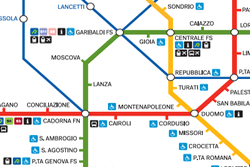 The four metro lines in Milan are numbered and have various colours:

Note that if you are staying in the centre of Milan, it is probable that you will not need to take the metro except to go to the airport.

Where to purchase the metro tickets?

The metro tickets and travel cards can be purchased in the metro stations, kiosks and off-licenses.

If you need to take the metro on a regular basis, we recommend buying various one-way tickets at a time or purchasing a travel card.

The frequency of the Milan Metro depends on the time of day, on the line and the day of the week, but generally the trains arrive every 2-4 minutes. Outside the city centre, for example, the last stops of the M2 line, trains run every 30 minutes. 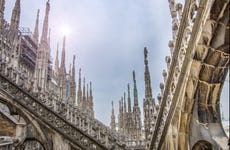