The Basilica of San Lorenzo was established during the fourth century and is the oldest church in Milan. It is dedicated to San Lorenzo and is built with enormous blocks that were taken from other Roman sites.

The church’s interior is decorated with marble and impressive mosaics. One of the temple’s highlights (which is not to be missed) is the Chapel of Saint Aquilino with its fourth-century Byzantine mosaics, adjoining the main church.

You can access a type of crypt from the Cappella di Sant'Aquilino, where you can see some of the original materials with which the church was built, which were all extracted from a Roman amphitheatre in the area.

In the square in front of the church are the Colonne di San Lorenzo (Columns of St. Lawrence), sixteen columns dating from the third century from ancient Milan, the Roman Mediolanum.

The church’s courtyard houses a copy of a bronze statue of Constantine the Great, the first Roman Emperor to convert to Christianity.

One of Milan’s main temples

The Basilica of San Lorenzo is the oldest church in Milan. It contains fourth-century mosaics and the piazza facing the church is also very interesting, with columns from the third century. In our opinion, this is a church definitely worth visiting. 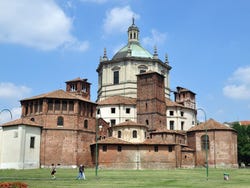 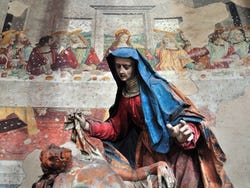