Lake Garda is the largest lake in Italy and it is one of the most popular tourist destinations in the north of the country. Compared to the rest of the lakes in the Lake District, Lake Garda is very lively and packed with both Italian and foreign tourists.

Lake Garda is surrounded by small, charming villages, which make great summer destinations. The most popular of these is Sirmione.

The village of Sirmione is a very popular tourist destination, situated on the Sirmio peninsula which runs deep into Lake Garda. As well as a spectacular view of Lake Como, Sirmione includes a spa, a picturesque old town with a castle, and the ruins of a Roman Villa.

Although Sirmione is a lovely village, it has become so popular that it suffers from mass tourism, which unfortunately means at times it resembles a theme park instead of an ideal little village.

Nevertheless, if you visit Sirmione when it is less packed, you can still appreciate its beauty. The town is fully prepared to welcome tourists, for example, it has several parking lots, but be patient, because it is normally difficult to find a spot.

Lake Garda has other trendy villages like Desenzano, Malcesine, Limone or Tignale. In addition, tourists can also visit Gardaland, the most-visited amusement park in Italy and the funicular that runs from Malcesine to the Monte Baldo.

Getting to Lake Garda

There are several ways of getting to Lake Garda from Milan, although the easiest and most comfortable way of travelling is by car. If you don’t want to hire a car, you can get a train from Milan to Lake Garda or book a one-day guided trip.

The easiest way to travel to Sirmione from Milan is by car. The route is nearly entirely by motorway (direction Verona) and it is well indicated. The distance is 87 miles (140 km).

To hire a car, click on the following link:

It will take between one hour and one and a half hours depending on the train you choose. The high-speed train tickets cost between €21 and €24. The regional train costs €9.20.

We recommend buying your tickets online on Trenitalia’s official webpage:

You can also book a one-day guided trip from Milan to Sirmione. The guided tour includes transport to Sirmione by bus and a guided visit of the area, so that you don't have to worry about anything. All you need to do is relax and enjoy the trip.

Getting around Lake Garda

If you have a car and are planning on spending a few days in the north of Italy, we recommend discovering the many charming villages around Lake Garda. If you don’t have a lot of time, you can take the ferries that cross the lake from several villages and towns.

Lake Garda also has car ferries, so you can get from one side of the lake to the other with your car.

On the following page you can check out the timetables and rates of the different ferries: 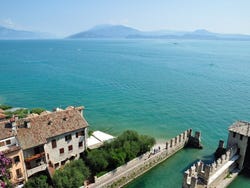 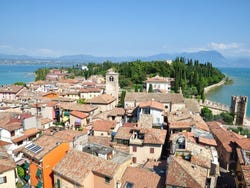 View of Sirmione from the Castle 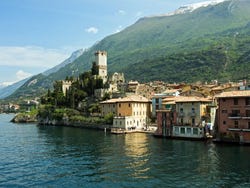 View of Malcesine from the boat 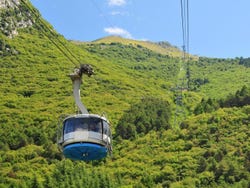 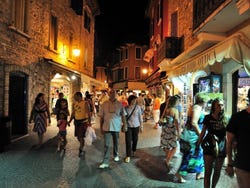 Sirmione is located 140 km to the east of Milan 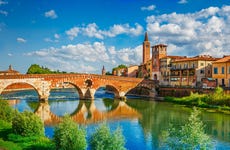