We currently don’t have any scheduled dates for this activity.

Check out all the activities in Milan

The Last Supper. You've seen pictures, you've seen reproductions and you've even seen parodies. Leonardo's masterpiece is so ingrained in our culture, that a guided tour is an absolute essential for any visitor to Milan. 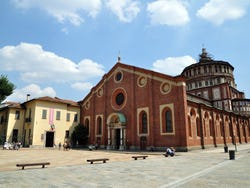 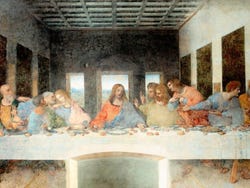 Over an hour and fifteen minutes, you'll be taken around the stunning Dominican church of Santa Maria delle Grazie, a fifteenth-century convent and UNESCO World Heritage Site. It's in the refectory of this church, in the 1490s that the Italian genius, Leonardo DaVinci painted one of the most recognisable works in the western world. Commissioned by Ludovico Sforza, Duke of Milan, great patron of the arts who also gave his name to the famous castle in the city.

The tour first takes you around the Santa Maria delle Grazie, a spectacular testament to the glory of Renaissance architecture, as well as Bramante's Cloister, an oasis of calm, green and beauty within the church. Then on to admire the masterwork.

Today, having survived nearly 500 years, bombardments during the Second World War, and several ill-conceived attempts at conservation in the eighteenth century, The Last Supper is in a fragile state. In fact, in 1556 - only sixty years after its completion - Leonardo's biographer Giorgio Vasari deemed the painting "ruined".

Today, restoration work has restored some of the former glory to the painting, and copies exist, but access to the original is jealously guarded. An extremely limited number of visits are available, making the sight of Leonardo's original masterpiece an exclusive treat. With this reservation, you have guaranteed entry, without having to wait in line, a once-in-a-lifetime opportunity to see one of the most important works in the history of art.

And with an expert guide, you'll be accompanied every step of the way by anecdotes about the painting, its creation, preservation, significance and history. A truly unforgettable tour.

All of our providers comply with local legislation and applicable health recommendations to avoid the spread of Covid-19. Show more

The activity takes place with a guide that speaks in english.

You can book up until the same day (12:00 pm) if there are still places available. Book now to guarantee your spot.

Wheelchair accessible. This must be indicated in the reservation.

We currently don’t have any scheduled dates for this activity.

Check out all the activities in Milan

Not refundable. This activity does not permit modifications nor cancelations.

I travelled by myself
10

I travelled with my partner
6

I travelled with my partner
Show all the reviews
like Free

9.60 / 10 314 reviews
Discover the secrets of an Italian city that combines history, fashion and architecture in equal parts on this free walking tour.
Free!
Book
like

No rating yet
Works by Caravaggio, Raffaello, Tintoretto and other extraordinary artists await you in the Pinacoteca di Brera. Afterwards, you'll go on a guided tour of this
US$ 67
Book
like

8.30 / 10 217 reviews
The open-top Milan sightseeing bus is the perfect way to discover all the main landmarks around the magnificent Italian city.
US$ 25.80
Book