Visit Sforza Castle, one of the most iconic monuments in Milan. On the guided tour you will discover the history of the building and the various museums that it houses inside. 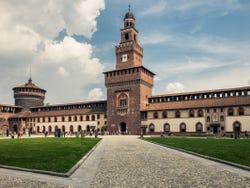 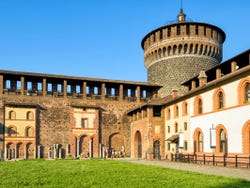 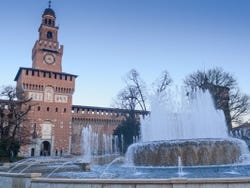 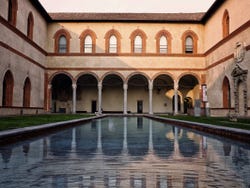 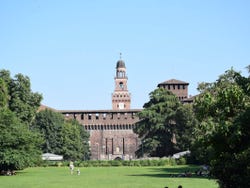 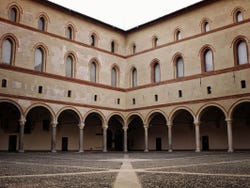 The tour meets at 11:30 am by the fountain in Piazza Castello square, opposite the majestic Sforza Castle. We begin by admiring this 14th-century fort from outside. It later became a ducal palace before finally being converted by the Sforza family into one of Italy’s most impressive forts.

Then we head into the castle to learn about the milestones that punctuate its history, such as the Milanese dispute over the castle, Napoleon’s order to demolish it, and the role it played during the Second World War.

We will also follow the footprints left throughout the Castle by artists of great standing, such as Leonardo Da Vinci and Bramante. An example of that is the Rondanini Pietà, the unfinished, last work of Michelangelo which is sure to amaze!

We will finish this guided tour in the Sforza Castle area after a two-hour tour of the different halls and rooms in this Milanese building.

Please check local restrictions before traveling. All of our services comply with recommendations to avoid the spread of Covid-19. Show more

It is mandatory to present a complete vaccination certificate. This information is for guidance only and may change depending on local regulations. Always check the restrictions before travelling.

You'll need to present your certificate of complete vaccination and a negative PCR test. This information is for guidance only and may change depending on local regulations. Always check the restrictions before travelling.

It is compulsory to display a complete Covid vaccination certificate or a negative PCR or antigen test. This information is for guidance only and may change depending on local regulations. Always check the restrictions before travelling.

Tours or activities will not consist of more than 15 people per group.

The use of masks is obligatory. The client must bring their own mask.

All those running the service (guide, driver etc...) will wear a mask throughout its duration.

Disinfected radio units will be provided, and headphones will be single-use.

Handing out of printed material such as maps or brochures will be avoided.

Reduced groups of up to 15 people.

Headphones for groups of 8 people and above.

You can book up until 24 hours before the activity as long as there are still places. Book now to guarantee your spot.

Wheelchair accessible. Accessible toilets. Free wheelchair loan service available. An accompanying person is required. This must be indicated in the reservation.

The indigenous community participates in the management of the activity.

US$ 56.40
No hidden fees or surcharges
Free cancellation up to 24 hours before the service starts
Book

Free! Free cancellation up to 24 hours before the activity starts. If you cancel under this time or do not show up, you will not be refunded.

I travelled with my partner
Show all the reviews
like

9.60 / 10 769 reviews
Discover the secrets of an Italian city that combines history, fashion and architecture in equal parts on this free walking tour.
Free!
Book
like

8.20 / 10 36 reviews
The open-top Milan sightseeing bus is the perfect way to discover all the main landmarks around the magnificent Italian city.
US$ 24.90
Book
like

7.40 / 10 68 reviews
Explore one of the world's most famous operas, and discover its secrets as well as a great collection of costumes, instruments and portraits.
US$ 32.80
Book